In English, as in several other languages, there are words that sound the same but mean different things. These similar-sounding but different-meaning words are homonyms. The word “homonym” comes from the Greek for “same name”. Some homonyms are especially confusing and hard to tell apart - in other words, which spelling corresponds with which meaning.

So, it is very important to recognize common contextual spelling mistakes, and to learn the different spellings/meanings of each homonym.

Here are some of the most commonly confused English homonyms:

For a long list of other English homonyms read here

One of WhiteSmoke’s unique features is the ability of its grammar checker to spot contextual spelling mistakes. Since technically these words are spelled correctly, it is necessary for a grammar checker to read and understand the entire sentence, in order to spot mistakes like these. Luckily, WhiteSmoke can do this!

Example # 2: Their is so much snow on the ground!

Example # 3: Your the best player on our team. 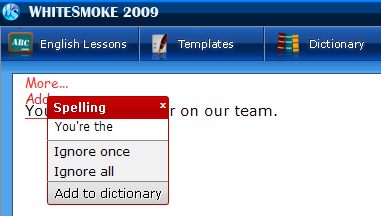